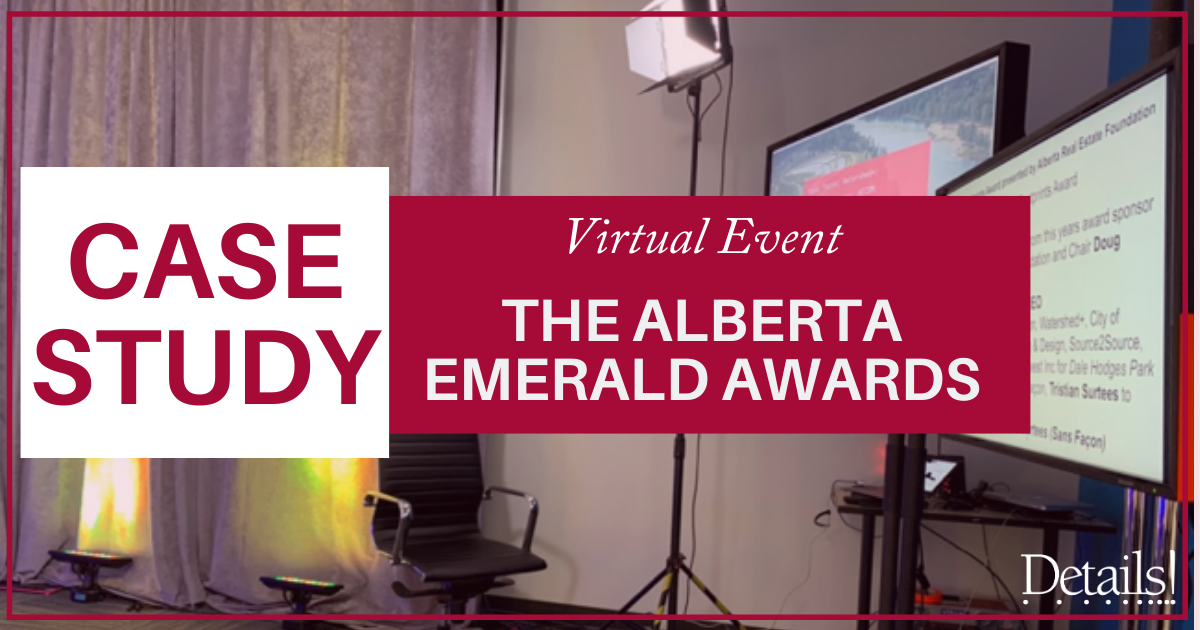 Award shows are one of our favourite events to work on. We get to flex our event production and stage management muscles in fun and creative ways!

One of the groups that we’ve been involved with for a number of years is the Alberta Emerald Foundation and the Emerald Awards.  We love being inspired by the environmental achievements in Alberta and helping the Foundation celebrate that.  We were looking forward to stage managing the 2020 Awards on June 2nd.

The Alberta Emerald Foundation was quick to realize back in March that their annual event was in jeopardy for June. With this insight, an early decision was made to cancel the live event and look into hosting it online, somehow, some way. The foundation reached out to us and said, “Sorry, I guess we won’t need you,” to which I replied, “I happen to be a Digital Event Strategist, so perhaps you will need me more than ever!” Since that conversation, we moved forwards to put together the Emerald Awards ONLINE!

As we began the process, one of our first calls was to our regular partners at FMAV. We started with a brainstorming chat about what we needed to do to make this online event happen. Of the many ideas and obstacles we ‘stormed,’ some of the things that we came up with and decided on were: 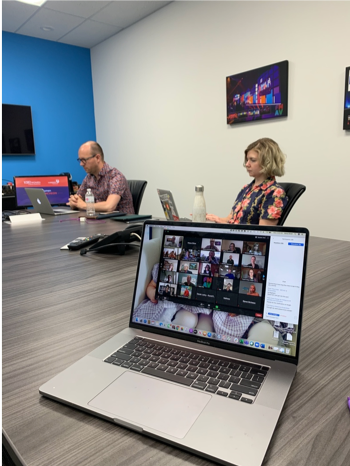 With all of these ideas in mind, we came up with a solution to answer all of them… We decided to broadcast the show via a WEBCAST!

Everyone who registered for the event could be sent the link to watch it, as well it would be posted directly on the Alberta Emerald Foundation’s site. For the finalists, we decided we would set up a Zoom call as a webinar. Then, as the recipients were announced, we would promote them to become a panelist in the Zoom call so that they could speak to the audience. This Zoom call would be directly shown into the webcast, as well, we would eventually put the webcast feed into the Zoom call so that those on Zoom wouldn’t have to watch two separate screens.

The plan was set into motion!

Moving forwards, a document was sent out to the people creating videos on some of the best practices for creating those. Then, once gathered, all the videos were sent to the media team (shout out to Hoopla Media!) who put the videos together, added name overlays on the videos, and created our polished video looks!

Along the way, we made the decision to disable any chat features on the webcast. There wasn’t any great way to moderate the chat within the system and we didn’t want any bots or trolls to derail the Award show.

When it came to the award show host, that had been determined before we made the decision to move to a virtual event. Julian Faid of Rapid Fire Improv in Edmonton was the PERFECT host for this event. Not only did his improv background make him perfect for this role, but he was also just finishing up his Master of Resource Economics and Environmental Sociology at the University of Alberta, a perfect fit for the Alberta Emeralds! We had a few meetings with Julian to talk through the scripting of the show, and together we changed things up so that the flow worked better for our new approach. We didn’t want our audience getting bored! 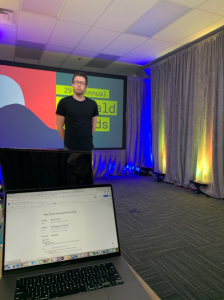 Before we knew it the day of the event was here!

The day before the event, I went up to Edmonton to stage manage the event in person. FMAV and their parent company (PSAV/Encore) have developed their own MeetSafe Guidelines which were followed for both days, ensuring everyone involved stayed safe. In addition to reviewing the various aspects of the event, we did a practice Zoom call with the finalists so that they understood how the process would work. The Alberta Emerald Foundation team, our host Julian, and myself went through a final read through of the script and finalized it.

Then it was the day of the event on June 2nd! By now we had already spent more time meeting and rehearsing this event than we ever had with a live one. That to say, virtual events take more time to plan and execute than some live ones! 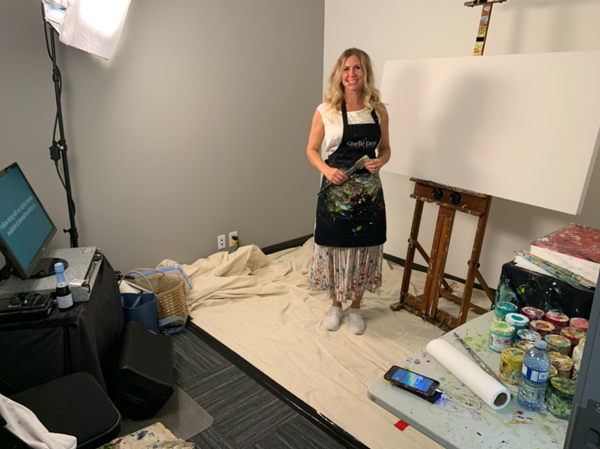 But no matter how much you plan, things can change in an instant!

Early in the day on June 2nd, Gregory Caswell, Executive Director of the Alberta Emerald Foundation, sent an email to the team. They were revising the sponsor reel, opening and closing videos, and the script. #BlackoutTuesday was happening and the foundation made a GREAT decision to participate. As a result, they were NOT going to be posting on social media and encouraged others to do the same. They asked that messages of congratulations to the finalists and recipients be sent the following day.

Once we were all assembled back at FMAV, we did a cue to cue rehearsal with the FMAV crew with one of the crew standing in for the Zoom call participants, and Gregory with the foundation standing in for our live painter (Giselle Denis – an incredible entertainer! I love watching how she can take a big canvas from nothing to something spectacular in such a short period – live!).

Everything seemed to be going okay. Julian asked, “What could go wrong?” I listed off a few things: the power could go out, the internet could drop, the fire alarm could go off… the usual things that event planners worry about.

And of course, the things that actually HAPPENED are never the things you think of.

The first challenge we faced was with the set-up of the Zoom webinar. Unfortunately, that delayed the start of the show as we had to identify who was who on the call. It just took longer than we planned, and we all felt tensions rising the longer we waited to start. And because we didn’t have a chat feature or social channels happening, it was difficult to communicate to our audiences, who were waiting patiently for things to begin. In the future we would DEFINITELY think that through more, but as this was the first time experiencing this issue, it just wasn’t something we were expecting or immediately ready for.

In the future I might put up a slide onto the webcast explaining that we’d be starting shortly, or pop in with a message from the host.

As stage manager, I was in a room with Julian and that was our stage. This role becomes so obvious when you need to get immediate messages to your host. The script says ‘Kim’ but ‘George’ is on the call? Your host can’t be looking at a text message to get that note.

(So if you are planning a similar virtual event, don’t miss out on having that IMMEDIATE connection between tech and the host!)

I was also there to provide every cue, so Julian knew EXACTLY what we were doing next, and how much time was left in each video. I also would walk down the hallway to give our painter, Giselle, warnings that her segments were coming up. The FMAV crew took care of the Zoom call participants. If we knew they were coming up next, we would provide a warning (for example, the ‘Lifetime Achievement’ participant knew he was the recipient so we didn’t need to wait until that was announced to unmute his microphone.).

Everyone had their role and knew what was coming next.

What we HADN’T known was how long those few seconds between announcing a recipient, promoting them to panelist, and getting them to unmute both their microphone and camera would feel. And it felt like a LONG time to us (it is probably the same amount of time as it takes someone to hug their partner/friend and then walk to the stage, but in that online scenario, you can’t SEE the delay and it just felt a bit like waiting for the unknown.).

We didn’t get everyone on the first try, and sometimes we didn’t get their cameras. In hindsight, we would develop more content to cover that time. Again, the advantage of a stage manager is that you can tell your host, “Go back, we’ve got that recipient now!”  We would also build in more interaction between the host and the recipient, which would help them know when they were “live” to begin speaking.

And then 90 minutes later, it was done.

We made it. We had taken this very traditional award show and gone online with it in a matter of WEEKS! The advantages were actually great. It widened their audience and allowed more people to watch it from not only across the province, but we can see from the reports that we had viewers from across Canada and some internationally. No longer were we limited to the people who could travel to the event venue. More dignitaries could attend, and now the finalists and recipients can share the recording for years to come! (Want to watch it yourself? Check it out here!) 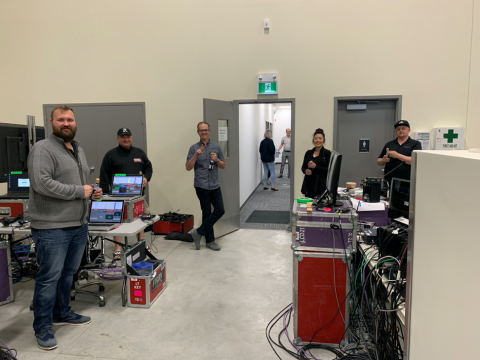 Thank you to the Alberta Emerald Foundation for having us, and to our partners at FMAV! We truly made this an event a success through our combined efforts!

Who knows what 2021 will bring! Maybe this event will go back to being in person, or will stay online, or be a combination of the two! What I do know is that we will certainly take what we have learned here and apply it to other virtual events that we have coming up.

Have an event you are taking virtual yourself? We would love to lend a helping hand! Julian’s view – two monitors showing him the program feed and the center monitor was his script that he had control over (this acts like a teleprompter and prevents the host from having to constantly look at paper). Two robocams were above Julian’s script. Robocams gave us flexibility on changing the camera shot, but eliminated the requirement of camera operators being in the room with us to maintain social distancing. Technical Direction and Cameras and lighting (Thanks Vincent Kangas for the great TD work!)